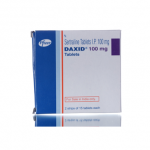 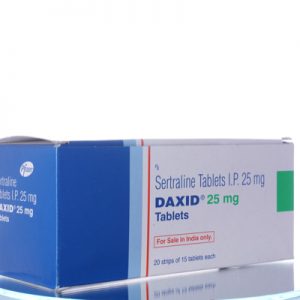 Quantity per sleeve = 30 Tabs (for the price quoted)

This medicine may be taken with or without food. Try to take it at the same time every day.

Sertraline is available as a tablet or oral solution.

Sertraline must be taken regularly for it to be effective. Continue taking this medicine even when you feel better. Do not stop taking it unless instructed otherwise, as stopping it suddenly could worsen your condition.

Depression: Initial: 50 mg once daily, may be increased, if necessary, in increments of 50 mg at intervals of at least 1 week. Maximum: 200 mg/day. Treatment duration: At least 6 months.

Obsessive compulsive disorder: Initial: 50 mg once daily, may be increased, if necessary, in increments of 50 mg at intervals of at least 1 week. Maximum: 200 mg/day.

Panic disorder with or without agoraphobia; Posttraumatic stress disorder; Social anxiety disorder: Initial: 25 mg once daily, increased to 50 mg once daily after 1 week. Subsequent doses may be increased, if necessary, in increments of 50 mg at intervals of at least 1 week. Maximum: 200 mg/day.

Premenstrual dysphoric disorder: Continuous dosing: Initial: 50 mg once daily, may increase by 50 mg each menstrual cycle if necessary. Maximum: 150 mg/day. Luteal phase dosing: Initial: 50 mg once daily for the 1st 3 days, may increase by 100 mg/day. Maintenance: All doses must be given in lowest effective dose, once optimal response is achieved.

If you often forget to take your medicine, let your doctor and pharmacist know.

Do not double a dose under any circumstances.

Signs of overdose may include the following:

People taking the following medication should not take Sertraline:

Sertraline may have the following side effects:

Inform your doctor and pharmacist if you are taking or using any of these medicines:

Always notify your doctor and pharmacist if you are taking any other medicines, including herbal tonics such as traditional Chinese medicines, supplements and medicines that you buy without a prescription.

This list does not include all medicines that may interact with Sertraline.

Sertraline, a naphthalenamine-derivative antidepressant, which selectively inhibits the reuptake of presynaptic serotonin (5-HT). It has minimal effects on norepinephrine and dopamine neuronal uptake.

Sertraline is used to treat the following conditions: